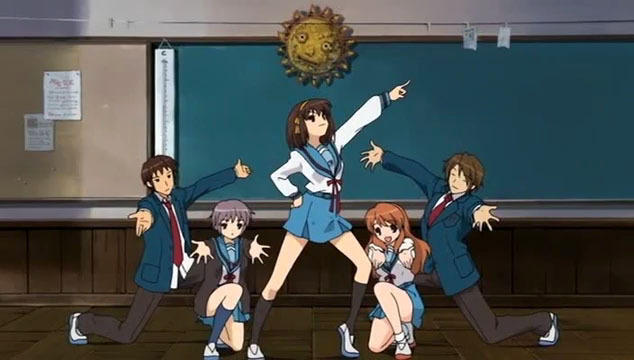 Images from the Anime Produced by
Kyoto Animation Co., Ltd.

Meet Haruhi Suzumiya,
A High Schooler Like No Other

Just another average first day of school for high school freshman Kyon is interrupted by a girl sporting yellow ribbons. “I’m Haruhi Suzumiya, from East Junior High. First off, I’m notinterested in ordinary people. But, if any of you are aliens, time-travelers, or espers, please come see me. That is all!” Kyon, thinking it is a joke, gives her the idea of doing such a thing. The S.O.S. Brigade is born as Haruhi takes the initiative to do as her classmate says.

Unfortunately for Kyon, he is automatically placed in this unofficial school club. Haruhi’s attitude can range from eccentric to demanding as any person would, making her path to getting whatever she wants however she wants it. This ideology may lead into manipulation, blackmail and other methods to achieve a positive result. Kyon will soon learn that keeping her happy is an important matter. 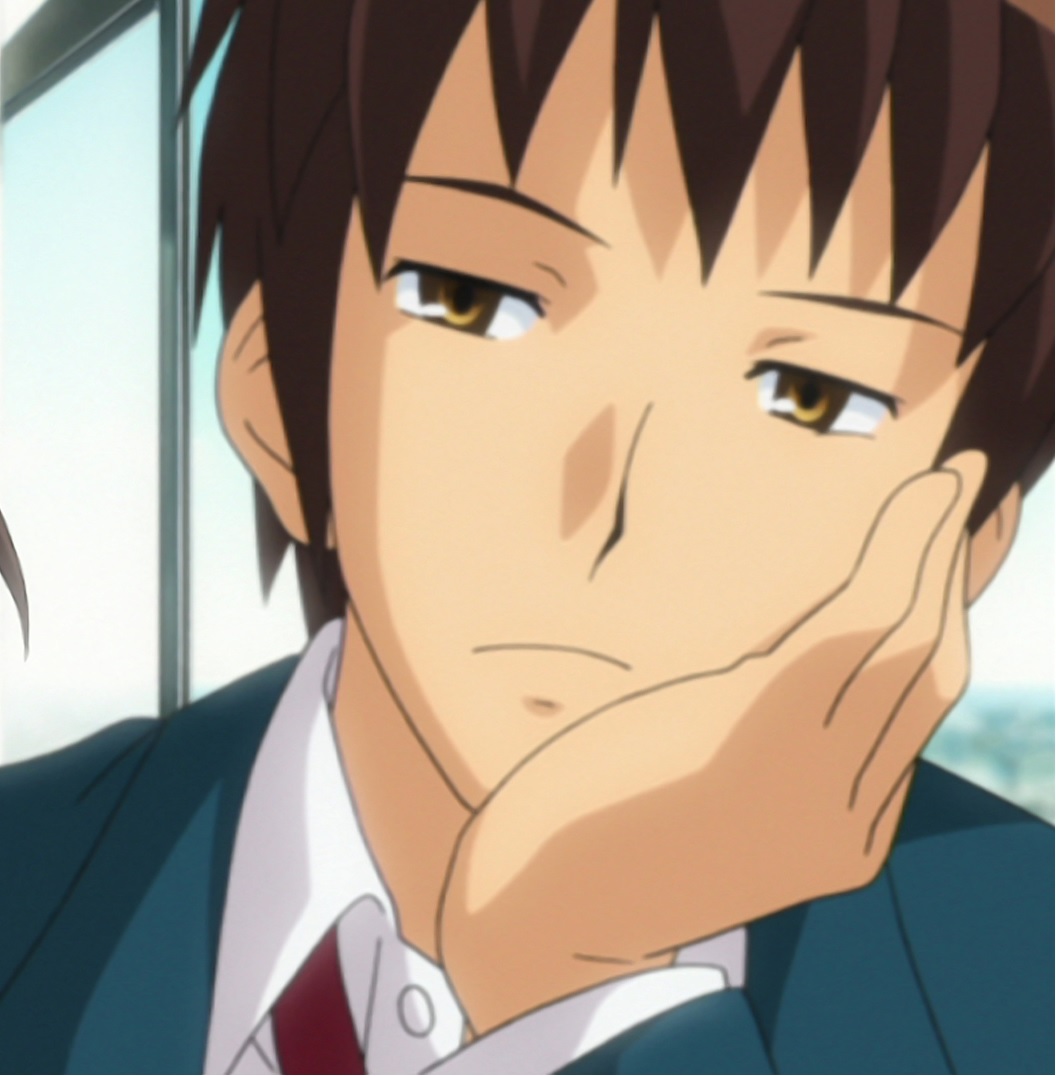 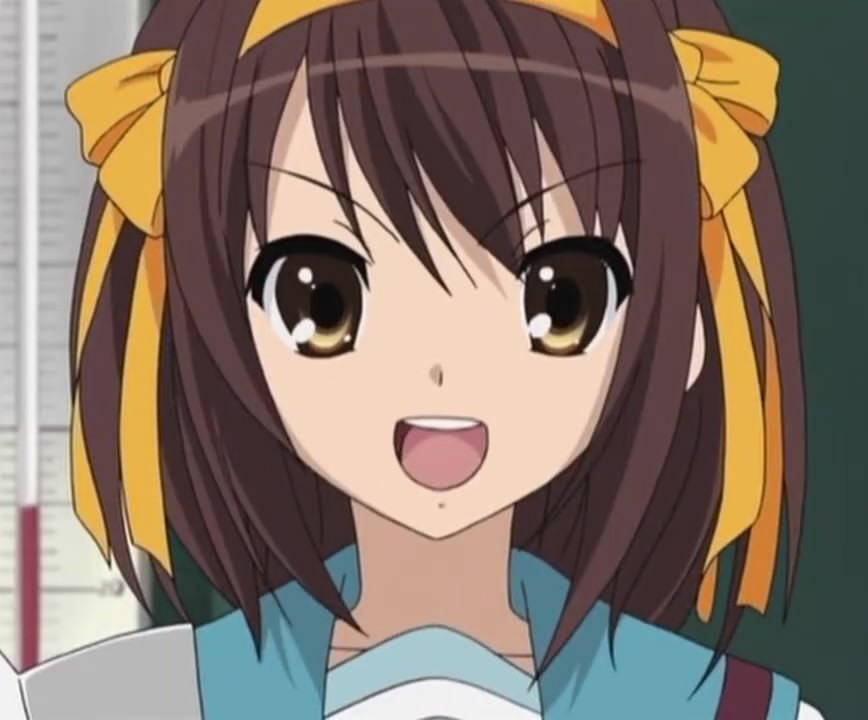 Haruhi’s interest in a club for her desires grows as the other school clubs displease her for their ordinary features. One day after class, Kyon is dragged from his seat and shown into the headquarters for his classmate’s grandiose idea: the Literature Club room. The room itself, according to Haruhi, comes with the bonus feature of Yuki Nagato, herself being the sole member of the Literature Club. Her quiet mannerisms and prolonged reading sessions automatically deem her a great member. Haruhi immediately “finds” another fascinating selection for a member with Mikuru Asahina, an eleventh grade girl with beautiful auburn hair, big glowing eyes and shy personality that just screams “moe”. Another wish of Haruhi’s is granted when a constantly smiling Itsuki Koizumi is transferred into her school. She believes in some mysterious forces where done to have him transfer being it’s something she wished not too long ago. 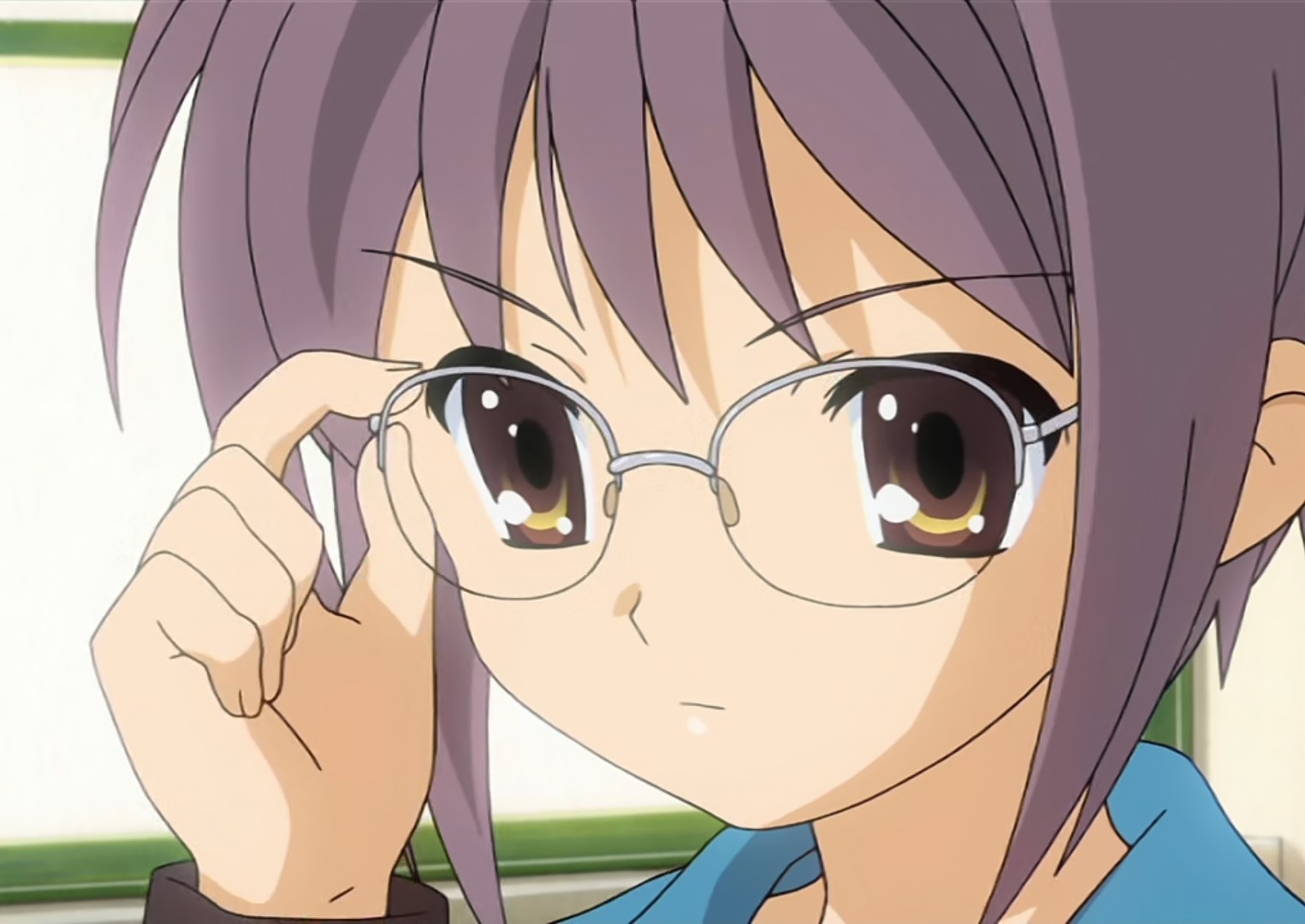 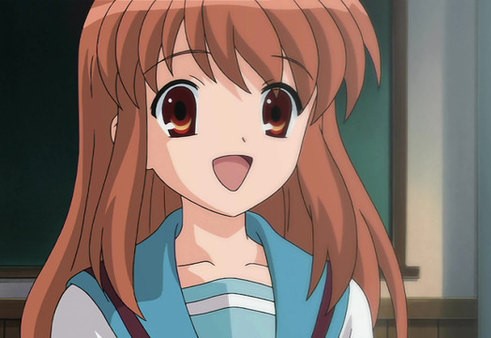 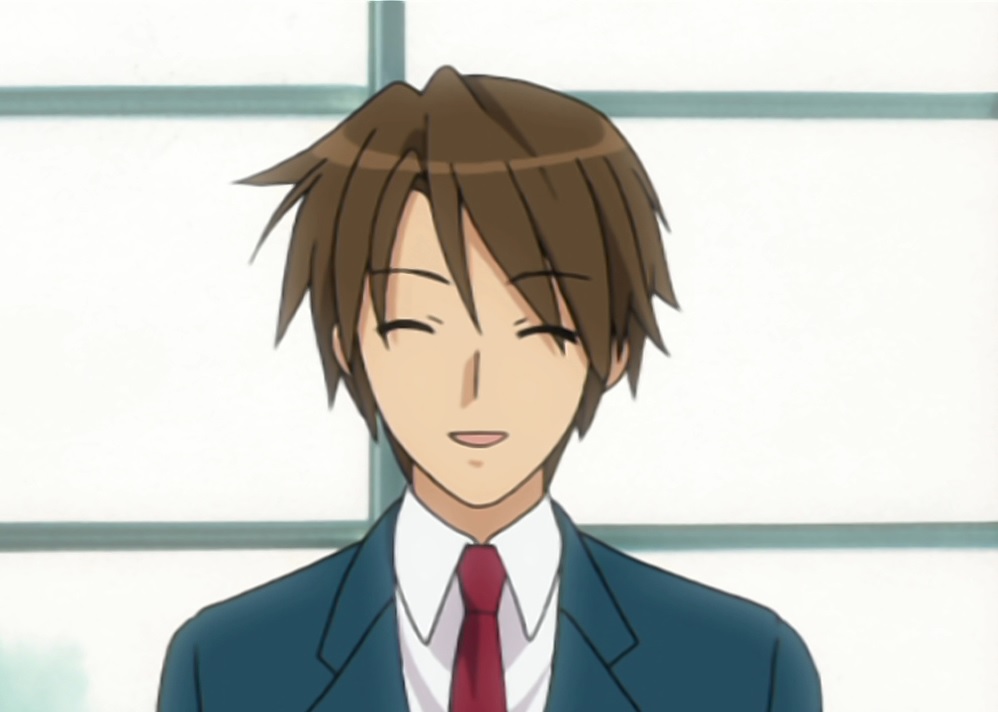 Who Exactly Are These New Members?

Kyon is very much bored of Haruhi’s banter as she pushes these students to involve themselves with their plans; he learns, however, these choices were not a coincidence as Yuki is the first to let him know Haruhi is someone beyond normal. Yuki reveals herself as an alien working to observe Haruhi, Mikuru is given to job to ensure Haruhi’s timeline stays in tact as a time-traveling agent, and Koizumi informs his line of work as an esper who wishes to maintain Haruhi’s happiness. Kyon begins to question his interactions with each of the S.O.S. Brigade’s members. Did Haruhi know about this? The answer he is given is no, and Haruhi herself must never know the details about this or the fate of the world will change forever. 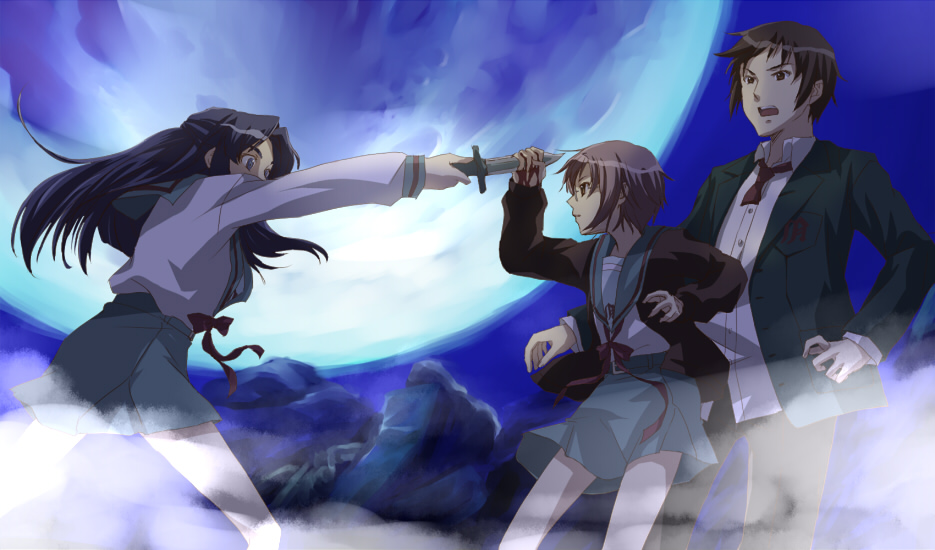 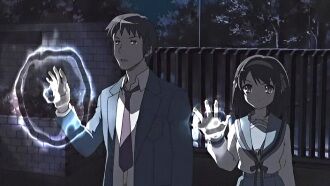 A school club is meant to be fun for all of it’s students. This fact changes once the name Haruhi Suzumiya is involved. Demanding the computer club to lend their computers with blackmail and dressing herself and Mikuru in bunny suits for promos are just the tip of the iceberg. After Kyon learns of the three S.O.S. members and their goals, his world turns on his head as life as he knows it. The most important thing to remember is the fact Haruhi could be the one subconsciously manipulating their lives; letting her know of this or provoking her to think negatively might actually be apocalyptic.

There is another alien present in his school whose desires are to trigger Haruhi’s emotions and observe her reactions. This devious process could only be done, according to the alien, by killing Kyon, Fortunately for him, Nagato steps in to fight against the perpetrator using reality manipulation. Some time afterwards, Kyon and Haruhi find themselves in an empty world with a pitch black sky. The supposed dream world was alluded to by Itsuki as “closed space”, a reality consisting of Haruhi’s emotions and giants called “celestials” who are meant to stimulate frustrating depressing thoughts. Espers are meant to fight against these beings but Kyon is the only one capable of raising Haruhi’s happiness.

Life’s Meaning According to Haruhi Suzumiya

The meaning of a person’s life through the eyes of Haruhi Suzumiya changed after attending a professional baseball game. She was one attendee in a stadium of fifty thousand, a stadium of fifty thousand is a minute fraction of Japan’s population, and that is an even miniscule-sized fraction of the world’s. She felt the little things in life that were typical could just be ordinary to many other people anywhere else.

“When I thought about it like that, everything became boring. If there’s really that many people in the world, then there had to be someone who wasn’t ordinary. There had to be someone who was living an interesting life. There just had to be. But why wasn’t I that person? So, that’s how I felt till I finished elementary school. And then I had another realization. I realized fun things wouldn’t come my way just by waiting for them. I thought when I got into junior high, it was time for me to make a change. I’d let the world know I wasn’t a girl who was happy sitting around waiting. And I’ve done my best to become that person. But in the end, nothing happened. More time went by and before I knew it, I was in high school. I thought that something would change.”

Haruhi’s new knowledge can be very inspiring to readers. Explore and seek the lives and activities which normal civilians wouldn’t be able to achieve with a lack of curiosity. If nothing could be found, keep trying as much as you can. Someday, somehow, there will be a discovery that will leave you fascinated with wonder. An outside observer may perceive Haruhi as pretty, crazy or even daring and weird; to the people who will learn her perspective, they will understand true excitement is not given, it is discovered. 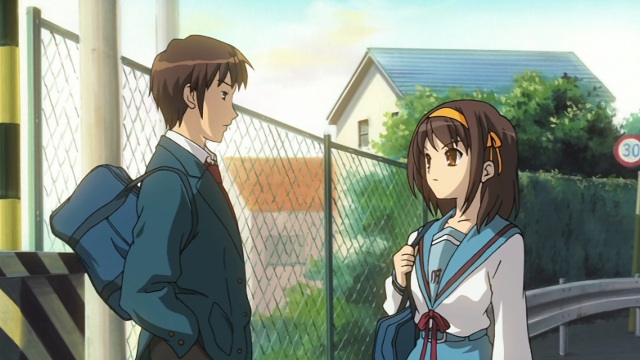 A Look the Life of the S.O.S. Brigade
Continues in These Volumes

The activities of the S.O.S. Brigade continue as they dwell into new ideas, new discoveries and new dangers.

The Sigh of Haruhi Suzumiya – Haruhi’s take in the school festival is to make a movie which rivals top studio productions. Mikuru stars as a magical time-travelling maid girl and Yuki plays as a powerful alien in a wizard’s coat. Kyon hurries to make sure the film is a success, Mikuru is left unharmed and the secrets of his classmates are kept a secret.

The Boredom of Haruhi Suzumiya – This multi-story novel takes readers on the different events the S.O.S. Brigade involve themselves with. Baseball season is here and Haruhi wants her friends to battle against a top-tier school. Learn about Haruhi’s past as Kyon travels back three years to help the future Brigade Leader with a plan to attract out-of-the-ordinary individuals hiding in the world of bland reality. Haruhi acts as a detective when the computer club’s president mysteriously disappears and when a murder on a remote island puts the breaks on a summer getaway. 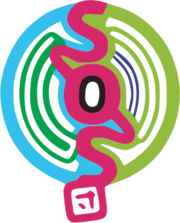 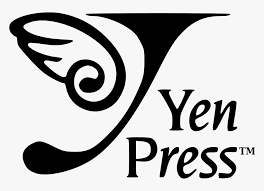